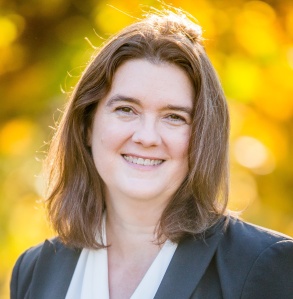 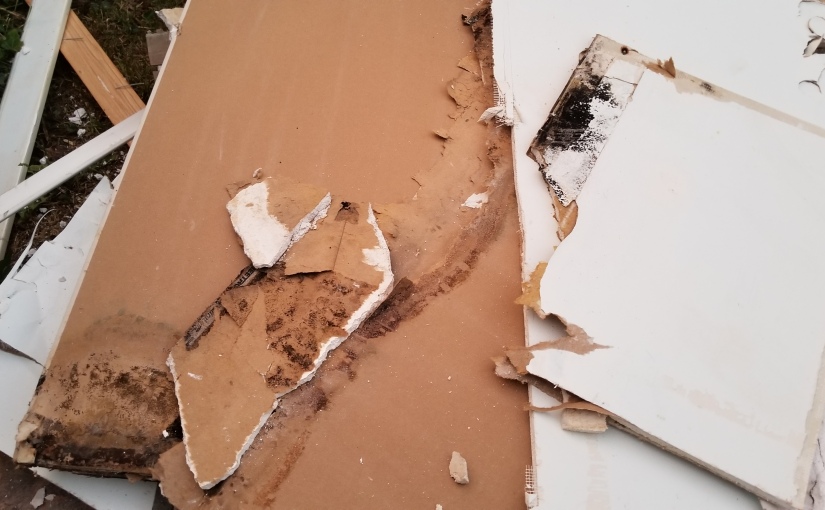 But Murphy and his “law” had other plans for me and for my family. Why am I telling you this? Because, as a first generation, blue collar academic, I want you to know that it’s OK to struggle and it’s OK to blend your skill sets into something that is uniquely you.

One Big Ole’ Wrench in the Works

Years ago, when the recession hit, the only way to keep the house was to rent out the basement apartment. So we did emergency resuscitation to an apartment that was stuck in the 70’s and managed to get it rented and cover the mortgage payment.

It’s been rented more or less continuously since, the last time to a tenant that stayed for five years. Over that time we’d done emergency renovations a couple of times – the most memorable (before this summer) being when the cast iron waste pipe in the floor showed itself to be cracked and seeping water under the floor tiles. Two days before the new tenant moved in, the plumbers dug up the slab and replaced the pipe. We laid flooring over the leveling compound as soon as it was walkable.

This time, I knew there had been water damage in the exterior hallway. I’d been there when the outside drain clogged and water came pouring in. The good-natured tenant put fans on the floor and helped mop up, but the vinyl floor tiles curled up and came loose. I thought we were going to be repairing the hallway and painting the apartment.

I had limited time to accomplish this, because I’d been taking temporary positions for the last two academic years and knew I’d be on my way to a third. My husband wanted to work out of state as long as possible before coming home, where he was supposed to get a short-term job while I renovated and wrote. But that isn’t what happened.

It’s one of those moments that gets etched in your mind. Do you have those? Walking from the apartment, through the entry hall, I noticed that one of the tiles had slid away from the others. Great, I thought, I’ll just pick this up and haul it to the trash on my way out. So I pick it up . . .

And underneath the tile is a puddle of water.

I thought it was dry.

I kept pulling. More water. Poked at the sheet rock. Soft. Long story short . . . we had to pull the flooring out of the entry hall, kitchen, and living room, and remove sheet rock up to 3′ in the entry hall. Thousands of dollars of demo, if we’d paid for someone else to do it.

Have a look in the video below.

And that was just the tip of the iceberg. Anything that could go wrong, did. That otherwise awesome 5-year tenant? They left the stove so gross that it took me three hours and a new set of drip pans to clean it. The bathroom sink wouldn’t drain.

The list is long. I honestly can’t remember everything that we did. I do remember going to bed with the heating pad because I wouldn’t be able to move in the morning if I didn’t have heat on my back.

Are You Worried that Your Crew Won’t Finish on Time?

When you’re starting a new teaching appointment and moving out of state, your focus is supposed to be on the new job and on finding a place to live. All of that goes out of the window when you’ve lost a source of income to water damage and you have very limited time to fix it.

My parents visited on several weekends to help with some of the heavy lifting and trade skills that I just don’t have. Hubby, daughter, and daughter’s BF all got put to serious work. I called in a few tradespeople when I needed work done that I don’t feel confident doing. I won’t touch plumbing. Not because I think I can’t do it, but because I never seem to get things tight enough and then they leak. When the plumber walks in, nods, and says “it’s really comin’ along,” that’s both gratifying and a sign that you’ve had to call the plumber too many times.

And then there were times when everyone else had to disappear and it was just me.

My daughter is a college student. She mentioned the project to one of her professors, along with our concern about getting done in time. He asked her if we could get the contractors to work faster and was apparently very startled to learn that WE were the crew.

You know those TV shows where they take you into amazing and unusual homes, generally owned by wealthy people who have contracted the work out? I’ve noticed that they tend to say things like “we replaced the floors” instead of “we had the floors replaced.” When I first saw this it was very confusing to me, because when you say “we replaced the floors,” to me that means that you got down on your hands and knees and physically removed and replaced the floors yourself.

This is a class thing. And I’m guessing that it’s where my daughter’s very well-meaning professor was coming from. When he heard that “we” were working on the house, his first thought was not that we were physically doing the labor. And I find this to be a very curious thing . . . it seems like a dual ownership of labor. Not only paying for others to labor, but owning their labor as well (and not just the product of the labor). There’s more thinking to do here . . .

It was a hellish summer. And it isn’t over. As I write this, my husband has flown back and is working on the last bits that didn’t get finished. We are opening it as a VRBO, which creates another set of tasks to be done (in addition to planning for classes, writing, etc). None of of slept well. I worked all day, every day, for weeks, and drove myself to the point of mental and physical exhaustion. It’s a place I know well from my days of writing my dissertation, and it’s a dangerous place to be.

But it was also incredibly fulfilling. I unearthed skills that I haven’t used in a very long time. I built things – real, tangible things, like this cabinet and this chalkboard surround. 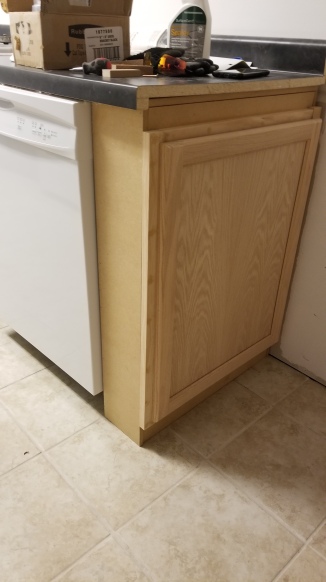 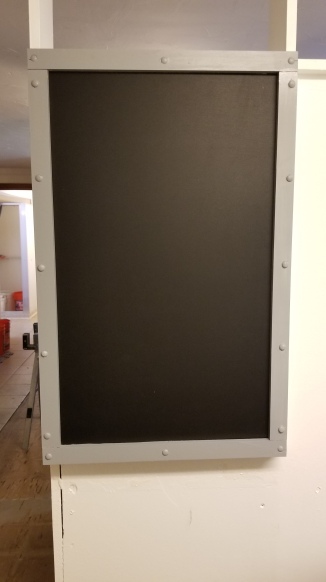 I laid floor tile and radically altered the look and feel of the entry. Hubby laid tons of click-lock vinyl planks. We caulked and sealed and redirected water and . . . 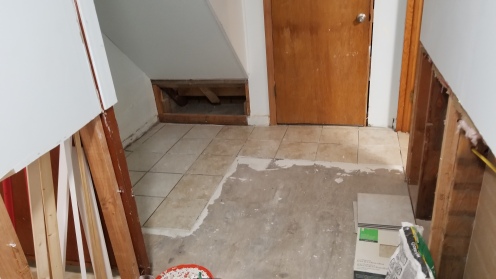 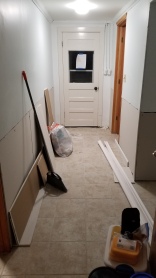 My daughter and I discovered that the only way to make one of the bedrooms “work” was to block off a doorway, which looked terrible. So we brainstormed and came up with a solution. So now the wall behind the headboard has a custom-built, lighted, fabric-covered frame that hides the worst of the wall clutter. (This is one of my favorite things. They’re LED and have a remote control. Yes, I am still a child.) 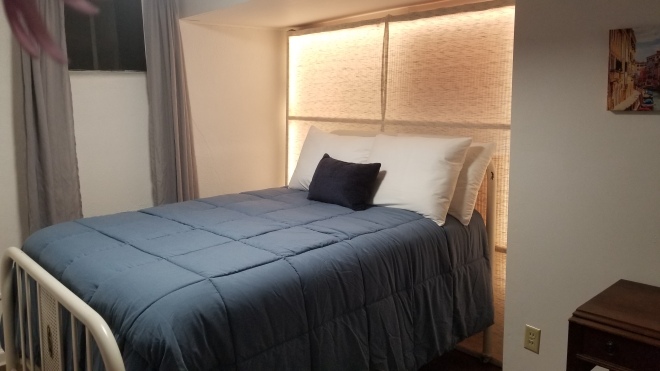 I knew that I didn’t know how to do everything. But I also knew exactly who to call to do the things I couldn’t. After two decades of home ownership in the same town, I’ve built relationships with good companies. No imposter syndrome. No worrying about being accepted or out of place. When the plumber showed up and I was wearing a bandanna over my hair and  jeans covered in dried mortar, I gained credibility rather than losing it.

I know how to blue collar.

I’m learning how to academic.

And it’s ok – even powerful and fulfilling – to be both of those things at once.

Want to see more from Undergraduates Write?  Subscribe using the button to the left.